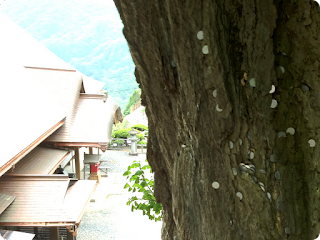 It turns out dad got it wrong. Money does "grow on trees." Just look at the photo at left as proof! Recently while hiking down a mountain past a buddhist temple, I stumbled across several of these trees with trunks stuck full of coins. I had seen this elsewhere, but not to this degree. It is the Asian equivalent, I suppose, of the "wishing well" or fountain of pennies one might come across in a Stateside mall. No harm done by these innocent superstitions, right?

For Japanese, however, such superstitions have permeated (and control) daily life. Japanese readily admit their Shinto polytheistic belief in "millions of gods" (yaoyorozu no kami) present in creation. Buddhist and Taoist gods were even brought over and absorbed into their belief structure. These gods are given to whimsy and must be sought out for blessing and good luck. Punishment and bad luck are just as likely. A whole ecosystem of superstitions are formed to guide one in how to receive or avoid such.


The people of many gods. I was surprised when I first learned that Japanese even have a god of the toilet (see Wikipedia here). Keeping a clean toilet ensures a pregnant woman of a good-looking child. "G(g)od of the Toilet" even became a hit song here in Japan a couple years back. Apparently the toilet god has been a common belief in eastern cultures for centuries. Suddenly one has new insight on Elijah's teasing of the prophets of Baal on Mt. Carmel (see a paraphrase of 1 Kings 1:18, like this version) when he suggested one possible reason why Baal did not show up. Did belief in a toilet god exist even then?

I certainly do not mean to make fun of my dear host culture. But it grieves me deeply as a missionary (as it does the heart of God) that Japanese have this twisted understanding of their Creator. For missionaries in Japan, this distorted worldview poses a great challenge to our gospel message. 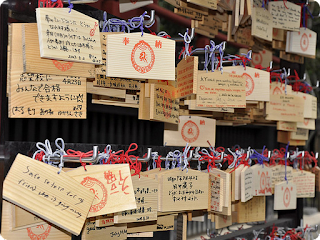 As I wrote in my previous post, I take some clues from a fellow missionary, the apostle Paul. Paul also faced the challenge of addressing a culture (the people of Ephesus) filled to overflowing with superstitious belief. They were keepers of the temple of Artemis. Their city was flooded with images, idols and occult activity. Paul spent three years in this pagan environment.

Paul's letter to the Ephesian Christians saved out of their superstitious beliefs rings with joyous praise for God's eternal purpose. Ultimately a good dose of theology proper is what the Ephesian church needed. Ephesians 1 sets the tone. "Purpose" "Plan" "Promised" "Power" "Will" "Authority" "Creation" are some words Paul uses  frequently in the letter. Ephesians needed to know that there is one authoritative God, Creator of all things, who wills and acts according to his eternal plans.

One wonders, then, why God permitted pagan superstitions and beliefs to exist so long before revealing the gospel to the Ephesians. Did God ignore the sad state of affairs in Ephesus? No. This was all a part of His eternal plan for bringing salvation to man and glory to His Son. Everything is "...according to the plan of him who works out everything in conformity with the purpose of his will, in order that we [the Ephesian church]...might be for the praise of his glory" (1:11~12).

And so, even in superstitious Japan, God is working out his purposes to bring glory to himself and salvation to the Japanese. Each Japanese soul saved out of this culture of superstition is a foretaste of that day His plan for this nation will culminate in "joyous praise." We keep praying and working toward that day. 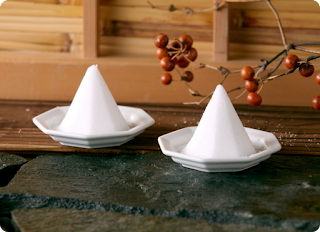 Put a broiled fishhead in your entryway. Pile salt just outside your front door. Avoid cutting your fingernails after dark. Paint your house neon yellow. Do not whistle at night. What do all these odd actions/non-actions have in common? They are ways to ward off bad luck in Japan.

Japan is filled with such superstitions. While some are modern urban legends, many come from the animistic roots of Japan's religious beliefs. The many (millions of) gods and evil spirits in nature are capricious and mischievous. They must be appeased or driven away lest they bring death or misfortune to oneself.

Many superstitions surround the fear of death and suffering. The numbers four and nine are unlucky because they are pronounced in the same way as death (shi) and suffering (ku). Hospitals avoid the use of these numbers for rooms and floors. You'll also never find a set of four dishes in Japan. Plateware comes in sets of three or five. 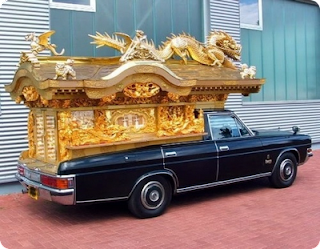 Other actions that invite death include bringing potted flowers on a hospital visit (a play on the word for "root" in Japanese suggests the patient may not recover). Sticking chopsticks in your rice (this is only for funerals). Using a single chopstick in both hands (only done to pick up bones after cremation). Sleeping with your head toward the north (dead bodies are laid out in this direction). Being in the middle of a group of three when your picture is taken (you are in the best focus and the pull of the camera upon your spirit is the strongest).

I know you're asking by this point, "Do Japanese REALLY believe that?" Unfortunately the answer is yes. The culture is saturated with it. The selling of fortunes (uranai) in Japan is a major business. Horoscopes and numerology play a big part in the psyche of the Japanese people. The availability of such with the explosion of smart phones has greatly exacerbated the problem.

And so one of the challenges in our mission work in Japan is speaking to a culture that is filled with superstitious beliefs. How do we respond from the Bible?

The spiritual scene in Japan is not unlike the superstitious city of Ephesus. The people of Ephesus lived in the shadow of the great temple of Artemis (Diana). Priests and "miracle workers" abounded. Occult worship was everywhere. The city was preoccupied with the black arts. The worship of Artemis included prostitution and mutilation rituals. Into this city of magic and witchcraft comes Paul with a message of the true and living God. It is helpful to read the way that Paul speaks to the Ephesian church in this culture of superstition in his letter to them. Recently I read Ephesians afresh with this "addressing-a-culture-of-superstition" lens. Stop and take a few minutes to do the same. I'll share a few insights in a future post.