The Rescue of Love (A Good Friday Meditation) 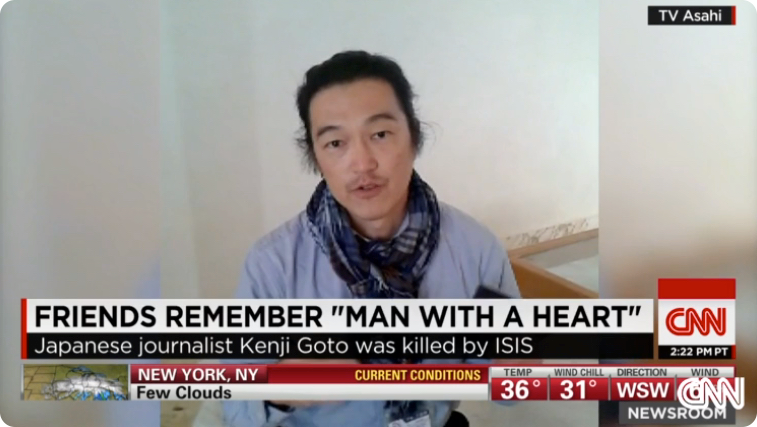 The pair of Japanese hostages are forever linked in our minds. We saw them in orange jumpsuits kneeling together in the Syrian desert sand. Behind them loomed a masked militant demanding a ransom in exchange for their lives. Tense days followed. Desperate negotiations and pleas for mercy. And then came the dreaded news of their horrific murders at the hands of their captors. Japan and the world were shocked and outraged.

But you might have missed the rest of their linked story. Kenji Goto and Haruna Yukawa were bound together far before their joint captivity. Yet the paths that led them to each other could not have been more different. One made a life in the midst of trouble. The other had a troubled life.

In Kenji, we see a glimpse of Christ’s love. Kenji was a Christian. (This in itself is remarkable considering the small number of Japanese believers.) As a journalist, he traveled to war-torn places to highlight the plight of persecuted groups and displaced refugees. He championed the cause of the weak and helpless, people in crisis and conflict who needed rescue from their circumstances. Kenji’s pastor stated that his Christian convictions influenced this selfless work.

Haruna was a very different man. If Kenji was a picture of Christ, Haruna was an apt picture of the world, mankind deformed by sin. Haruna was wounded deeply by life in ways that twisted his personality. A string of setbacks, including bankruptcy and the death of his wife, had damaged his psyche. He supposed himself to be a reincarnated Manchu princess. He became obsessed with right-wing nationalism and weaponry. His unstable behaviors ranged from suicide attempts to high-adrenalin risks. He had entered Syria for the self-motivated purpose of using the instability of the region to sell security services. Haruna clearly needed a rescue from himself.

Haruna’s rescue began when he met Kenji. In Kenji, Haruna found a friend who overlooked his faults and peculiarities, and cared for him even to the point of jeopardizing his own life.

When Haruna was first captured by the Free Syrian Army in March of 2014, Kenji was called by his contacts to help question this Japanese prisoner. Instead, Kenji was able to negotiate his release. The two returned to Japan together. In October 2014, Haruna returned to Syria and stumbled into trouble again. This time he was nabbed by ISIS. Kenji went after his hapless friend in a quest that resulted in his own capture. The rest of their fateful story together played out in media reports worldwide.

If Kenji is a picture of Christ, and Haruna a picture of the world, it’s not hard to see the gospel parallels in this story. Kenji determined to bring his wayward friend home. Christ came to seek and save his wayward people, and bring them safely home. Kenji looked past his twisted friend’s oddities. Christ’s divine love looked past the marred image of God to see the intrinsic worth of the soul. Kenji set aside his personal interests and risked his life to free his friend held hostage by militants. Christ set aside his deity and paid the ultimate price at Calvary to redeem mankind held hostage by Satan and sin.

If Haruna’s life had been spared by the sacrifice of Kenji, the redemptive illustration might have been complete. We wanted a different outcome for both of them. But what transpired in their final days of captivity together we may never know. Perhaps Kenji’s tender faith softened his heartless captors to consider the ways of Christ. Perhaps Kenji’s selfless testimony humbled Haruna to spiritual conviction. Perhaps the two safely returned to their true homeland of eternity in heaven together after all.

Heaven will tell their full story. This side of heaven, we can let their story inspire our own. We can drink in deeply that selfless, pursuing divine love that gives itself for selfish, wayward man. The cross shouts to us that we are loved more than we can know or understand. We can let that love motivate us into selfless ambition for our fellow man. Our own divine rescue of love constrains us.

“This is love: not that we loved God, but that he loved us and sent his Son as an atoning sacrifice for our sins. Dear friends, since God so loved us, we also ought to love one another.” 1 John 4:10-11

Monthly support still needed:
$153 as of
Give securely online through WorldVenture. Gifts receipted.