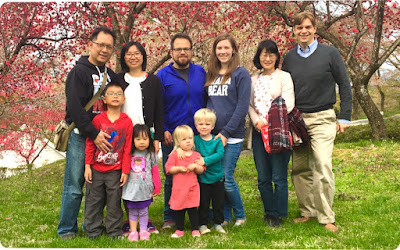 New career missionaries have joined us in church planting. New schools and schedules have begun for our family. God’s new beginnings are more frequent and more beautiful than Japan’s spring cherry blossoms...

From the beginning of our work in Kawasaki in 2001, our vision has been to start a small cluster of new churches outwardly focused and networked together for greater impact in this area. We believe a team is the best approach for the future. And we’re working to create one. We’ve laid out our rationale for all this in our vision booklet viewable online here: lavermansinjapan.org/vision

Justin & Lindsay Mitchell arrived in February, settling just “up the street” from us about 20 minutes away. Yes, there’s been some learning curves in food, shopping, hospital (Lindsay will have a baby in August), transport and financial services, also the tiny space in Tokyo, mail, garbage sorting (an ongoing mystery even for me - see lavermansinjapan.org/gomi) and so on. And the Japanese language will be a humbling adventure for years. But they’re adapting great.

Then during April, we hosted Gary & Jennifer Chang and kids here in Kawasaki for a two-week “vision trip.” They’re raising support and coming to Japan through WorldVenture in 2018 to join hands with us on this new team.

Bit by bit the team is forming, but we need others, too. Specifically, a full-time Japanese worker, an English speaker for TESL outreach (see lavermansinjapan.org/tesl), and more missionaries with expertise in music, media, youth, or kids ministry.

Protestant Christianity in Japan began just south of us in Yokohama bay in the 1860’s. But the number of churches has never kept up with the density of people and need. New churches are needed for the 5.2+ million in Kawasaki-Yokohama, 99% without Christ. Would you pray with us for the formation of this “mission possible” team for Japan? 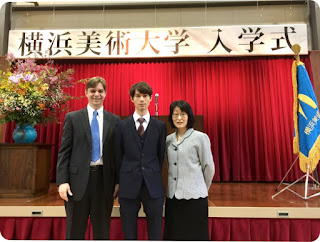 No fooling. April 1st was a big day in the Laverman home. Justen started his new adventure: college entrance in Japan (the school year starts from April here). We moved to Japan when he was two and now he’s twenty. Those years got him fluid in the language (no thanks to his dad’s messy Japanese examples) and prepared to build a life in this country He started at “Hamabi”: YokoHama Bijustu Daigaku (College of Design), commuting daily by train from our house about 30 minutes away.

Justen wants to serve God through his talent in design. Those of you who have seen his artwork know that he shows great potential. We look forward to seeing how the Lord will blend all these third-culture kid experiences, design skills and languages together for His glory through Justen in the future. 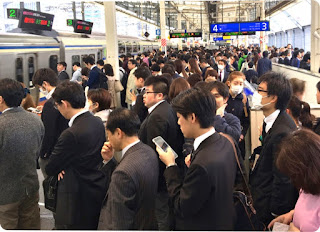 The size of the spiritual need in Japan never stops to amaze me. A few recent episodes with lines may illustrate:

The first line was April 27 at Musashi- Kosugi station. I was wrestling to get the Chang family (see front) and their suitcases to the spot on the platform for the airport express, but the morning commuters were as thick as it gets. We were only able to move down the platform a few yards at a time after each train pulled out of the station, and before the next arrived. The video link above might help you understand.

A few days earlier I had viewed this station and Musashi-Kosugi area (our location for next church plant as God provides), with a visiting supporter from the 62nd floor of one of the many hi-rise apartments. Now I know where all those residents go in the morning. There needs to be an evangelical church witness for them!

The second line was May 4 at a shrine in Kamakura. Hundreds had rented a basket from the shrine to insert coins or bills to dip into the magic spring that multiplies prosperity. I took a video (above link) to give you an idea. Japan doesn’t need more prosperity. They need Christ! Superstitions can’t give what He offers freely.

Pray for Musashi-Kosugi. Pray that God will lead us to a person of peace through which to start a church in this neighborhood soon. Pray for them to put their affections not on the superstitions of this world, but on the work of Jesus Christ.

Monthly support still needed:
$98 as of
Give securely online through WorldVenture. Gifts receipted.